Sobel Wiki
Register
Don't have an account?
Sign In
Advertisement
in: Battles of the Rocky Mountain War

Edit
watch 01:36
We're Getting Mutants in the MCU - The Loop
Do you like this video?
Play Sound 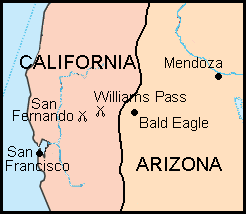 The Battle of Williams Pass was the major battle of the Rocky Mountain War of 1845 - 1855. The battle consisted of a months-long stalemate within Williams Pass in the Sierra Nevadas between four armies of the Confederation of North America and the United States of Mexico between November 1850 and April 1851.

The battle was a response to events taking place in Burgoyne and Mexico City. In April 1849, North American Governor-General Henry Gilpin, fresh from having ousted his predecessor, Winfield Scott, had ordered a North American army under General David Homer to take San Francisco, the capital of the state of California. While Homer's army was wintering in Mendoza, Arizona in March 1850, Mexican President Pedro Hermión sent a newly-raised army under General Michael Doheny north from Mexico City to cut off Homer's line of retreat. Gilpin learned of the dispatch of Doheny's army that spring, and ordered the Southern Confederation militia under General FitzJohn Smithers to march west to intercept Doheny.

Gilpin's message to Smithers was lost in transmission, and by the time the S.C. militia began to move, it was too late to intercept Doheny. Meanwhile, Homer led his army through Williams Pass in June 1850, moving slowly to avoid ambush. After emerging from the pass, he was met by the California Guard under General Francisco Hernandez. At the Battle of San Fernando on 5-7 July, Hernandez lost 4,500 men, while Homer lost over 5,400. Both armies retreated, the Mexicans falling back to San Francisco, and the North Americans to Williams Pass.

Doheny's army was successful in blocking Homer's army within Williams Pass, and Hernandez was able to advance to the western end of the pass. By mid-November 1850, the two Mexican armies had Homer's men trapped. Smithers' army, after making a frantic march west through Mexico del Norte and Arizona, leveled the Arizonan town of Bald Eagle, and attacked Doheny's army from behind. Smithers' attempt to crush Doheny's army failed, as Doheny's Indian regiments withstood three frantic North American attacks.

Smithers and Hernandez both refused to withdraw from Williams Pass, and when the winter snows began to fall, all four armies were trapped. During the next five months, 140,000 North American soldiers and 97,000 Mexicans attempted to survive while battling the elements and each other. Survivors of the four armies began to emerge from the pass in late March 1851. By April, the 31,000 surviving Mexican troops had made their way to San Francisco, while the 27,000 surviving North Americans were making the long retreat back to their outpost at Mendoza. All four commanding generals were dead, Homer by suicide, and the others of exposure.

Sir Wesley McDougall wrote afterwards, "It was the most senseless battle in the history of warfare. Never before or since have so many brave men died for so foolish an objective. Pride, and nothing else, dictated the retention of the Rockies."

News of the catastrophe reached both capitals in mid-summer, and the people of both nations reacted by turning against the war. However, neither Governor-General Gilpin nor President Hermión were prepared to seek peace, and the war continued until both had been removed from office.

Community content is available under CC-BY-SA unless otherwise noted.
Advertisement